King James I created the hereditary Order of Baronets in England on 22 May 1611, for the settlement of Ireland. He offered the dignity to 200 gentlemen of good birth, with a clear estate of £1,000 a year, on condition that each one should pay a sum equivalent to three years' pay to 30 soldiers at 8d per day per man (total – £1,095) into the King's Exchequer. A Baronet is British hereditary title of honour, ranking below a baron.

The extant baronetcies are listed below in order of precedence (i.e. date). All other baronetcies, including extinct, dormant (D), unproven (U), under review (R) or forfeit, are on a separate list of baronetcies.

The baronetcy lists include any peerage titles which are held by the baronet.

To be recognised as a baronet, it is necessary to prove a claim of succession. When this has been done, the name is entered on The Official Roll. This was ordained by Royal Warrant in February 1910.[1] Those who have not so proven are shown below as unproven or under review or dormant. A baronetcy is considered dormant if, five years after the death of the previous incumbent, no heir has come forward to claim it.

The current Baronet, Sir Christopher Tuite is the head of that family line.

The Tuite Baronetcy, of Sonna (An Sonnach) in the County of Westmeath, is a title in the Baronetage of Ireland. It was created on 16 June 1622 for Oliver Tuite. At the time of the Norman Invasion of Ireland, Henry II granted to Hugh de Lacy, 1st Earl of Ulster, the lands of Ó Maoilsheachlainn, king of Meath in return for the service of 50 Knights. As one of de Lacy's barons Risteárd de Tiúit received large grants in Westmeath and Longford. His descendants became the barons of Moyashell, in Westmeath. De Lacy conferred on the Tuite family the castle of O'Casey (Irish Ó Cathasaigh), chief of Saithne, now "Sonnagh," in Westmeath. The seventh Baronet was murdered at Sonnagh. This senior branch of the family became Protestant in order to hold on to their lands and in the early twentieth century moved to Britain. The Sonnagh estate is today in ruins outside the town of Ballynacargy in County Westmeath.

Hugh Tuite, Member of Parliament for Westmeath, was gazetted a baronet, "of Sound in the County of Westmeath", on 3 July 1838,[1] which was reported in The Times on 4 July. However, it appears that the announcement was an error[2] and on 6 July a notice appeared in The Gazette that the creation of the baronetcy was "not to take place."[3]

M, #597412, b. 3 November 1949
Last Edited 23 Mar 2019
Sir Christopher Hugh Tuite, 14th Bt. was born on 3 November 1949.1 He is the son of Sir Dennis George Harmsworth Tuite, 13th Bt. and Margaret Essie Dundas.2 He married Deborah Anne Martz, daughter of A. E. Martz, on 15 February 1976.1
He was educated at Wellington College, Crowthorne, Berkshire, England.1 He graduated from Liverpool University, Liverpool, Lancashire, England, with a Bachelor of Science (B.Sc.)1 He was reserve officer of the Wildfowl Trust between 1978 and 1981.1 He graduated from Bristol University, Bristol, Gloucestershire, England, with a Doctor of Philosophy (Ph.D.)1 He was Controller of the Nature Conservancy.1 He succeeded as the 14th Baronet Tuite, of Sonagh, co. Westmeath [I., 1622] in 1981.2 He lived in 2003 at 43 Church Street, Yarmouth Port, Massachusetts, U.S.A.1 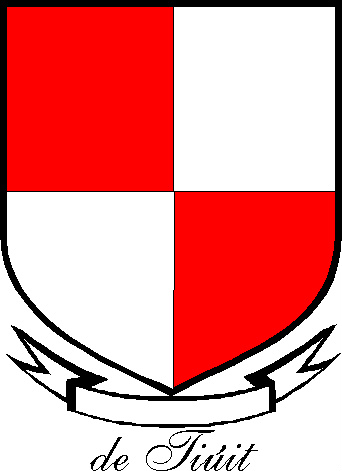 Coats of Arms were developed in the Middle Ages as a means of identifying warriors in battle and tournaments. All grants of arms are made to individuals (not all families of a given name) and pass only to their heirs, normally in the male line.

The Tuite Coat of Arms is documented in Burke’s General Armory. The description of the arms is as follows:

When translated the blazon also describes the original colours of the Tuite Arms as:

Above the shield and helmet is the crest, which is described as:

“An angel in silver vestment, the right hand holding a naturally coloured flaming sword, the left hand resting on a shield coloured and charged as the arms.”

Beneath the shield appears the motto: 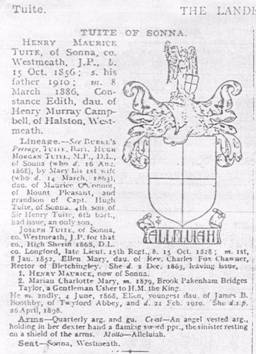 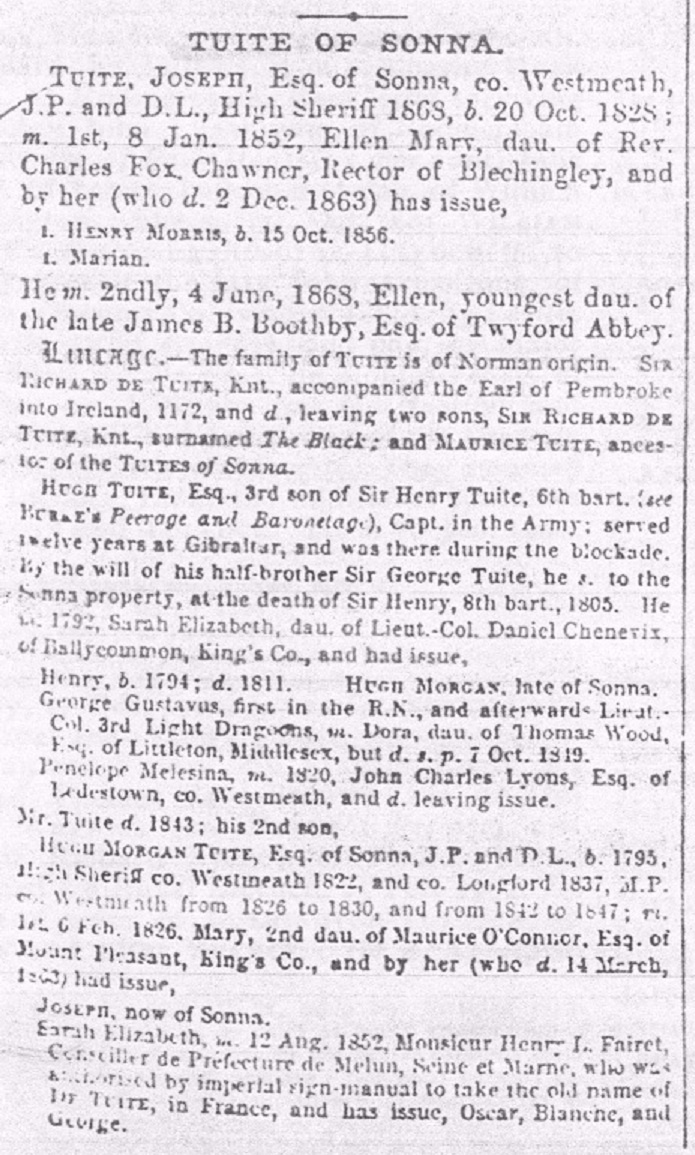