On referring to Burke’s “Landed Gentry” we find that a Sir Henry Tuite this sixt baronet of Sonna married, in 1728, Mary Rochfort, sister to the notorious Earl of Belvidere, by whom he had one son, George, born in 1729. Sir George succeeded to the title, and resided at Sonna. He was murdered on the 12th of February, 1783, while sitting in his study about ten o’clock at night. He had a small favorite King Charles spaniel lying on a chair beside him, whose brains were beaten out as well as its master’s by some blunt instrument. There was not any robbery committed, neither were the papers in the study disturbed. The murderer was never discovered, and it was supposed the assassination of the baronet was the result of domestic treason. A hammer was found in the adjacent pond besmeared with blood, which is supposed to have been used by the assassin.

Sir Henry Tuite, Sonna, born in 1741, was the second son of Sir Henry Tuite and succeeded his hal-brother Sir George following his murder. Sir Henry served in the Royal Navy. He married in 1784, Elizabeth, the only daughter of Thomas Cobble, of Newbridge, and, dying in 1805, without issue, was succeeded in the title by his nephew, Sir George, only son of Mark Anthony, the second brother.

Sir George Tuite was born in 1729 and died in 1783. A couple of days before Sir George was born his mother Mary was supposed to have been on her way to Dublin in a carriage. The carriage pulled up at Kinnegadwhere a deformed beggar came up to the carriage and started to beg. From that day until Sir George was born, Mary was very worried that her baby would be deformed and she thought that if the child was deformed she would die. When the boy was born he had two thumbs on the back of his hand. When Mary saw this she died within a couple of hours of the birth.

Hugh Tuite, born 1747, entered the army, was in the 14th Light Dragoons, and attained the rank of Captain in the 89th regiment of foot, in which he served twelve years at Gibraltar, three years and seven months of which was during the blockade. He there was made a prisoner of Baron Von Helmstadt, and received his sword. Mr. Lyons, in his “Anecdotes of the Westmeath Gentry,” relates that Captain Tuite attended one of Lady Ormond’s parties shortly after his retirement from military service, and there met Captain Arthur Wellesley, afterwards Duke of Wellington, who was aide-de-camp to Lord Westmoreland, the then Lord Lieutenant of Ireland. The Captain was engaged at a card table with Lady Ormond as his partner, when he observed some young gentlemen and officers highly entertained and smiling at each other. He soon saw from the direction of their eyes that he was the object of their mirth, and turning sharply round to ascertain in what manner he had been so fortunate as to contribute to the evening’s amusement, he found Captain Wellesley behind his chair diverting himself and the company with his queue, the end of which was he had at that moment most unfortunately a tight hold of. Captain Tuite stood up, he was a tall and powerful man, and took the facetious aide-de-camp by the neck, and lifted him completely off the ground, gave him an angry shake, and dropped him without uttering a word. In a short time Captain Wellesley, accompanied by another officer, came up to Captain Tuite, the former much agitated, and apologised for the unwarrantable liberty he had taken with him. Captain Tuite drew himself up to his full height and replied, “As the apology has been as public as the offense, I forget it, sir,” and made his bow.

At Waterford, Mr.James TUITE of the Earl of Drogheda's Light Dragoons to Miss Agnus ROBERTS.

A passage from “The men of no property, Irish Radicals and Popular Politics in the Late Eighteenth Century”, by Jim Smyth, 1992.

By around 1795 “the merger or more accurately, coalition, between the United Irishmen and Defenders was indeed already in place, at least in Ulster. The making of that coalition carried profound implications for both movements. Like the commencement of negotiations for French military aid, United Irish efforts to assimilate Defender lodges into their new military structures signaled the seriousness of their insurrectionary designs. It also posed problems for their strategy of forging a union of Irishmen of all creeds. Defenderism represented many things to many men, among them Catholic sectarianism. The experience of John Tuite – ‘CaptainFearnought’ of Meath – illustrates the consequent United Irish dilemma. Tuite was ‘sworn to both acts’ in 1795, that is he took first the Defender and then the United Irish oaths, but the Defender oath pledged him ‘to quell the nation of heresy’ as well as to ‘dethrone all kings, and plant the tree of liberty’. The second part of the oath indicates how interaction with the United Irishmen accelerated and strengthened the politicising impact of ‘French principles’; the first part shows how much more the secular radical gospel had still to do. Putting the best gloss possible on a coalition fraught with internal tensions, Emmet later asserted that the United Irishmen had infused Defenderism with ‘tolerance and republicanism’. Presumably Tuite’s trial report had escaped his notice.”

During the eighteenth century there were at least two branches of the royal dynasty in France. The house of the Comtes MacCarty Reagh de Toulouse was founded by Justin MacCarthy, born in Springhouse, County Tipperary, in 1744. The family was descended from Donal-na-Pipi, Prince of Carbery (d. 1612). Justin settled in France, having decided to quit Ireland until religious liberty was restored. He had an “immense fortune” and became a naturalized Frenchman, receiving letters patent in September 1776, which elevated him to the French nobility. He married in 1765 to Marie-Winifride Tuite, daughter of Lord Tuite of Westmeath. He also bought what became known as the Hotel du MacCarthy in Toulouse, a palatial eighteenth century house. In 1868 the ownership passed to the old Toulouse family Courtois de Vicose, who still own it.

During renovations to Libby's Country Kitchen Restaurant in Granard, owned by Mary and Pauric Harten, an eighteenth century wall plaque was discovered in an area known as Tuite's Lane. However the plaque, dating from 1798, carries the words Tuite's Row. It was discovered when Pauric decided to remove the old plaster from the building with the possibility of restoring an old archway. The Row is named after the Tuite family who were prominent in Granard during the Norman period in the twelfth century and it has engendered much interest among local residents.

“This stone was erected by Mark Tuite for his successors and predecessors and for his father Oliver Tuite died Feb 22nd 1757 age 57 and mother ?? died 1756”

From Wikipedia, the free encyclopedia:

The High Sheriff of Cavan was the British Crown’s judicial representative in County Cavan, Ireland from the 16th century until 1922, when the office was abolished in the new Free State and replaced by the office of Cavan County Sheriff. The sheriff had judicial, electoral, ceremonial and administrative functions and executed High Court Writs. In 1908, an Order in Council made theLord-Lieutenant

the Sovereign's prime representative in a county and reduced the High Sheriff's precedence. However the sheriff retained his responsibilities for the preservation of law and order in the county. The usual procedure for appointing the sheriff from 1660 onwards was that three persons were nominated at the beginning of each year from the county and the Lord Lieutenant then appointed his choice as High Sheriff for the remainder of the year. Often the other nominees were appointed as under-sheriffs. Sometimes a sheriff did not fulfil his entire term through death or other event and another sheriff was then appointed for the remainder of the year. The dates given hereunder are the dates of appointment. All addresses are in County Cavan unless stated otherwise.

Murder most foul. Sir George Tuite was murdered in 1783. 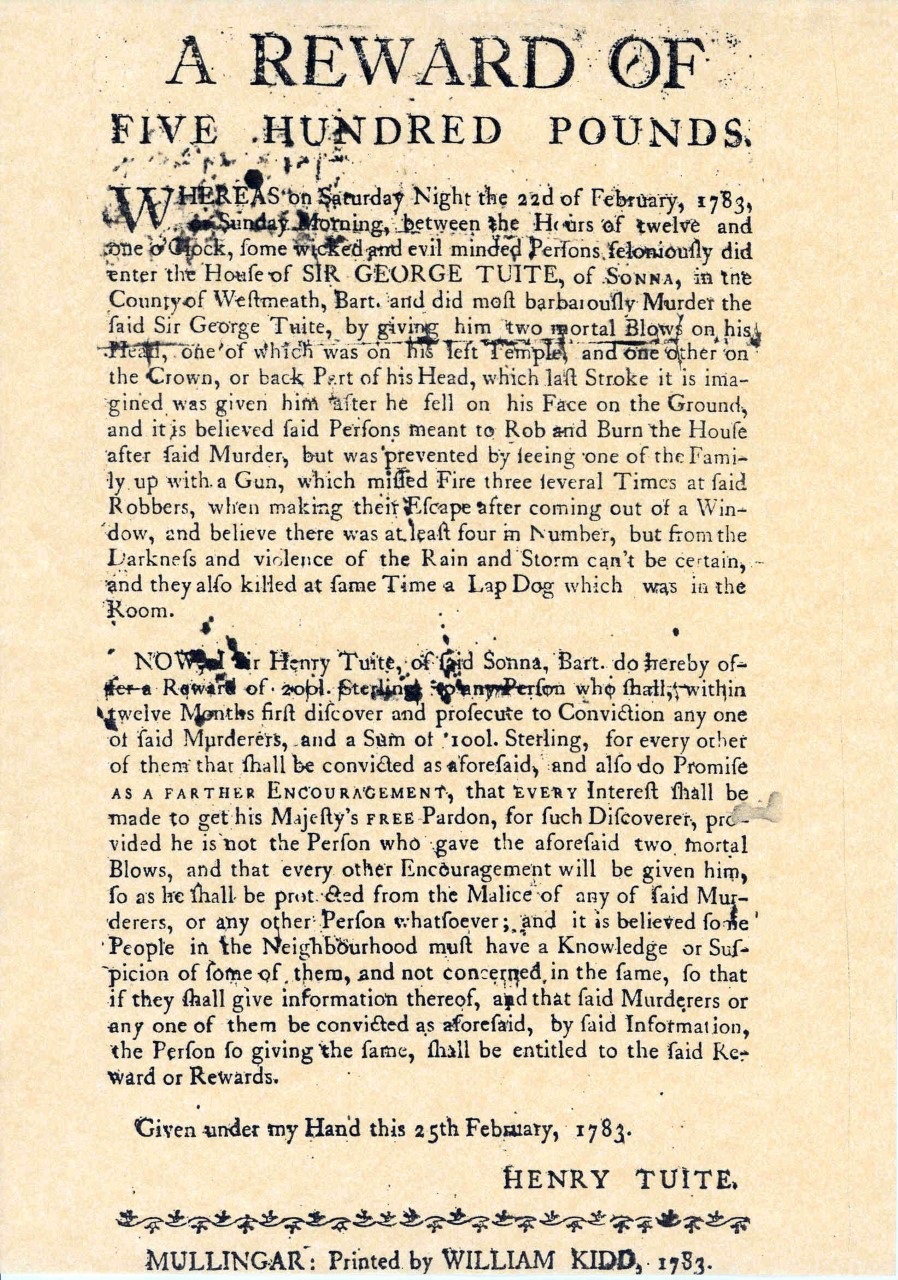