3rd John de Tuite (nephew of the last Sir Richard – the 2nd) fought with King Edward I in 1302 in Scotland but died soon after.

4th John was succeeded by his son, Richard (known as “Richard of the Castle” for the many castles he built), who sat in the Parliament of 1310.

Sir Roger Mortimer, acting as the king’s representative Justiciar of Ireland, had beaten the only Scottish King of Ireland, Robert Bruce, out of Southern Ireland and pushed him to Ulster. In December 1318 Mortimer was called back to England and left Sir John de Bermingham, whom he had knighted the previous year, to fight Bruce. On October 14th 1318, under Bermingham’s command, Sir Richard Tuite along with other of Mortimer’s most trusted knights, met Bruce’s army in battle at Faughhart, just north of Dundalk. The English charged through the Scottish ranks and destroyed them, killing many, among them Irish Chiefs who had sided with Bruce and included the King of Argyle and the King of the Hebrides. Hugh and Walter de Lacy escaped but Bruce did not. He was found under the corpse of John de Maupas’s who had slain Bruce with his last breath.Bermingham later came to court with Bruce’s head having ended the only successful campaign of Edward II’s reign.

The Age of Christ, one thousand three hundred twenty-nine.

“Cathal, the son of Donnell O'Rourke, a good materies of an Earl of Breifny, and others, were treacherously slain by the sons of John O'Farrell, and the English of Meath, in the house of Richard Tuite, at the monastery of Fore.”

5th Lord of Sonna was John, Richard’s eldest son. He sat in parliament in Dublin in 1333 and was knighted in 1335. He died without a son.

6th John’s brother, Thomas, became the next Lord. He had a son called James who held land in Jordanstown between Mearscourt and Paddenstown, Ballynacargy.

7th After his death his eldest son became the next Lord who also had a son named James who held lands in Jordansstown and Tuitestown.

The parish of Mullahoran is situated on the Cavan/Longford border. The earliest remains of human settlement are two dolmens in the townlands of Drumhawnagh, and Middletown. Like neighbouring Ballymachugh and Gowna, the parish is part of the diocese of Ardagh and Clonmacnoise, while most of the rest of Cavan is part of Kilmore. This boundary was set at the Synod of Kells in the 1100s. At the time Mullahoran was part of Cairbre, a pre-Norman territory. It was probably  held by the de Tuites in the aftermath of the Norman invasion. In the 1300s, theO’Reillys captured the area from the de Tuites, and it became part of Clan Mahon. The O'Reillys had a castle atDundavan in the 1500s.

Much of the parish is low-lying poorly drained land and it would have been impassable wilderness until the 1700s. Large parts of the parish are blank on Petty’s map of Cavan, drawn in 1655. It would probably have functioned as a fastness for the Clan Mahon O’Reillys, a place where they could withdraw to when under pressure. There is no reference to the parish in the Irish Annals. The 1655 census returns for Cavan have been lost, but returns for similar land in the adjoining part of County Longford show that much of the low-lying land on the Cavan border was uninhabited. It is reasonable to assume the same for much of Mullahoran.

In the spring of 1646, before the Battle of Benburb, General Owen Roe O’Neill had a training camp at Callanagh. The parish would have been suitable territory for ex-soldiers who chose to live outside the law as rapparees, after theCromwellian settlement. There is a hill in the parish called Rapparees hill.

Most of the modern parish was hacked out of the wilderness by dispossessed natives. The modern Catholic parish ofMullahoran was created in the mid 1800s when the southern part of Drumloman was detached and became part ofBallymachugh. The Church of Ireland Church for the parish was in Drumloman, which is in the Catholic parish ofBallymachugh. It was an early Christian site. The parish has always been overwhelmingly Catholic. In the 1836 Ordinance Survey map, the parish is devoid of trees, a sure sign that there was no resident gentry. Much of the parish was owned by the Dease family who lived at Coole, County Westmeath. Even today tree cover is sparse.

According to the Annals of the Four Masters, Crover Castle was built in 1393 by Thomas O’Reilly, chief of Brefnie. The castle is a small, two storey medieval tower house, built on a small island in Lough Sheelin. Historically it was known as Caislean na Locha (the castle of the lake). Thomas captured the land around Lough Sheelin from the Norman de Tuite family.

Thomas` conquests established his descendants as Lords of Clanmahon, which gave its name to the modern Cavan barony of  Clonmahon. Crover Castle was their principal seat. At the height of Clan Mahon's power their lands extended far to the south, into the modern counties of Meath and Westmeath. His grandson Richard was Lord of Clan Mahon and Brefnie. He was drowned in a boating accident on Lough Sheelin in 1418. Clan Mahon power was broken in the early 1500s by a combination of pressure from the Anglo Norman Nugents, and the senior branch of the O’Reillys.

Crover Castle played an important part in the 12 year war, when it was one of Owen Roe O’Neill's Ulster garrisions. In the spring of 1646, O'Neill established a camp at Callanagh in Mullahoran, to train an army of 5,000 men. The arms to equip it which had been imported from Europe, were brought to Crover Castle on 70 horses. O'Neill marched from Callanagh on May 21st, and on June 5th he fought and defeated General Munroe at Benburb. In February 1648, a skirmish occurred near the castle, between a Captain O,Reilly, garrison commander at Crover, and a Captain Nugent, in command of 60 foot. Nugent emerged the victor, and reported the capture of 100 guns. In the final years of that war the castle was destroyed by Cromwellian artillery bombardment from the shore. 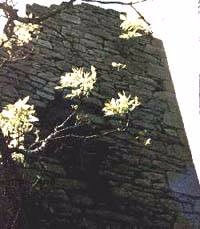 ORDER to pay John Morice, deputy of the Jcr of Ire., 100m granted to him by the K. for various expenses incurred by him, viz.:that Richard Tuite, arrested by him and committed to the custody of Milo Verdon in Trim castle, stayed there for 3 weeks and 4 days at John’s expense, £8 6s 8d;that he paid to John Clynton for wages of himself and 10 men-at-arms and archers and 10 hobelars who came from the pars of Uriel to Trim, £4 10s and to John Drake, coming from Margalyn to Trim with 60 hobelars, 60s; and to Thomas Dalton, coming from Loxeudy with 60 hobelars, 60s and that Thomas Wogan, John Husee, John Wellesley and LewelinusMouncelewe, with a large number of men-at-arms, remained in his company at Newcastle McKinegan, at war against the Obrynnes, at his expense, £4; and that he lost in the K.’s service a horse, worth 40m, and another, worth 20m; and he kept various English and Irish hostages at his own expense. 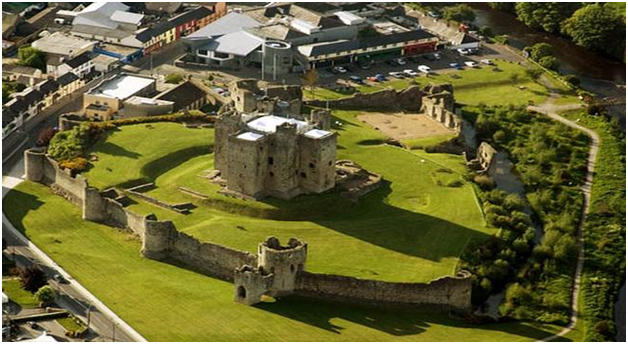